Christy, Sinkology’s food-loving recipe blogger, is here to share some recipes she has created for the Sinkology blog that reflect our view of a copper sink: simple, timeless, affordable, and beautifully rustic.

Autumn is here, or is it? To put it mildly, I’m disappointed that the weather isn’t reminiscent of fall here in Maryland yet. And it isn’t looking promising this week either. I’ve been looking forward to everything the autumn season brings even before last autumn ended. And now, I am getting impatient! If it wasn’t obvious already, autumn is my absolute favorite season. I love the crisp morning air, brightly colored leaves, apple picking, cozy sweaters, my birthday (I had no control over that one), comfort food – stew and soup with homemade bread, and sipping hot wassail under my favorite soft blanket with my family. It’s safe to say, I do a lot more baking too, which fill my house with delicious and mouth-watering aromas.

Quick bread is one thing I love baking especially during the cooler seasons. It has been awhile since I made one so when I saw Smitten Kitchen’s most recent recipe for marbled banana bread, I knew I had to make it to kick off autumn. I lucked out that I already had overripe bananas begging to be used. I’ve made countless quick bread recipes over the years and this marbled banana bread recipe has easily sprinted to my top 5 all time favorites. We went bananas over it so much that I made it twice in a row. I can’t explain how tasty it is; the combination of warm cinnamon-y banana crumb intermingled with deep chocolate crumb flecked with melted chocolate flakes makes it a perfect marriage. It has the right amount of sweetness and incredibly moist (yeah, that word but it applies so well here). My husband is a huge fan of quick breads and he gave this one two thumbs up! Let’s begin making this tasty quick bread and I wouldn’t be surprised if you made it again and again!

Preheat the oven to 350. Butter or spray with non-stick a 9×5 inch loaf pan. Set aside. Get all your ingredients ready. This delicious bread is quick to make. In a microwave safe large bowl, melt one butter stick in the microwave. Add 3 overripe bananas in the bowl with the butter and mash until mostly smooth. I prefer my bananas to be almost black before I use in quick breads. Whisk in ¾ cups brown sugar, 1 large egg, 1 tsp. of vanilla extract, 1 tsp. baking soda, and ¼ tsp. table salt. Stir in gently one cup of flour until incorporated. Pour half of the batter into a second bowl. Just eyeball it. In one bowl, add ¼ cup flour and ½ tsp. cinnamon, stir to combine. In the other bowl, add ¼ cup dark cocoa powder (regular cocoa powder will also work, it will be lighter in color than mine) and ¾ cup chopped chocolate chips, stir to combine. My favorite brand is the Ghirardelli 60% chocolate chips. I measured ¾ cup first then I did a rough chop since I prefer flecks of chocolate instead of big chips throughout the bread. With a butter knife, make a couple figure-8s lengthwise and again widthwise, marbling the batters. Don’t do too many or the marbling won’t look distinct. Bake for 55-65 minutes or until a tester inserted in the center comes clean. Both of mine were done at 50 minutes each. Let cool in pan for a few minutes then invert onto a cooling rack. My family devoured the first one right away and I’m hiding the second one with little success. 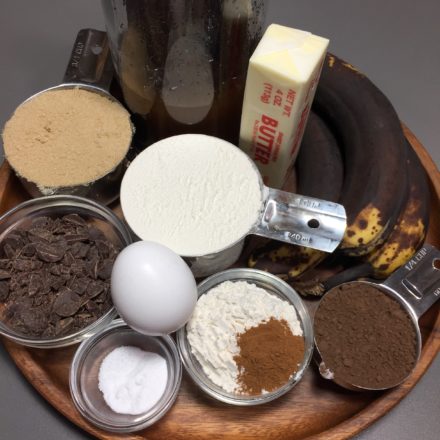 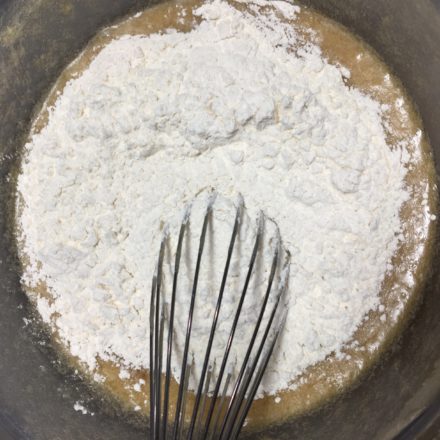 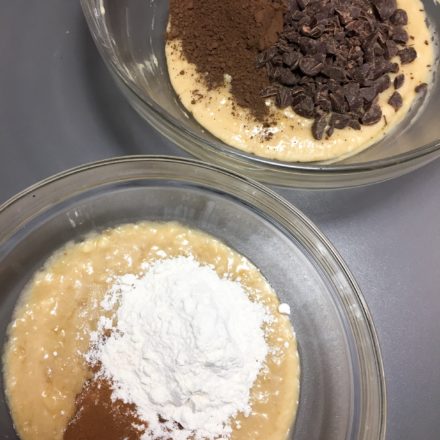 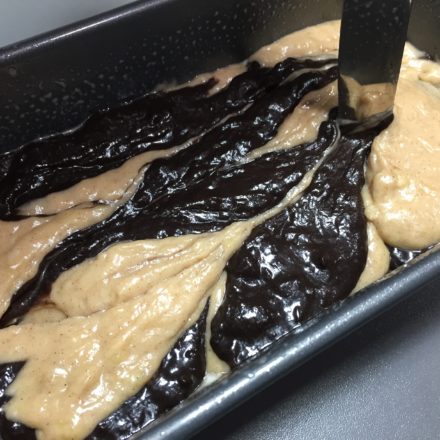 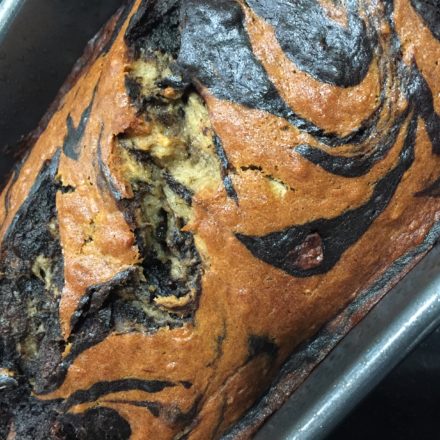 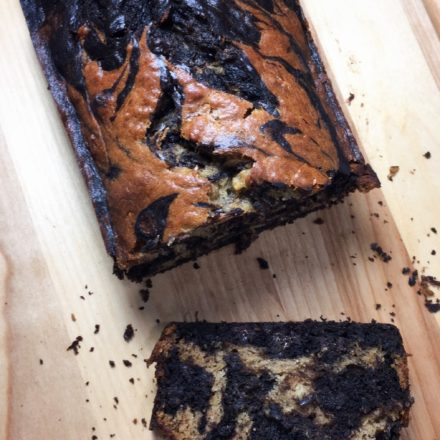